In a Time of Change: Microbial Worlds​

​Microbial Worlds is the culmination of 16 months of collaborative work by visual artists, writers, and scientists on the topic of microorganisms. Microbes are the most numerous and diverse organisms on the planet; they include bacteria, fungi, protozoa, algae and viruses. While some cause disease and contribute to climate change, others are responsible for promoting human health, removing toxins from the environment, and maintaining healthy ecosystems.

"When we try to pick out anything by itself, we find it hitched to everything else in the Universe." - John Muir

In this series I explore a few ideas and interconnections between microbial worlds and larger systems. We are all connected on this planet through the natural world and one of the primary components of those connections are those we cannot see unaided.

Plants communicate with each other through common mycorrhizal networks through a complex, diverse and symbiotic processes that can  involve carbon, chemicals, fungi, and bacteria. One of the key discoveries is that although plants compete for resources like light and nutrients between individuals and species, they also share resources with one another when under stress.
There are many many recent journal articles and books written on this subject. Here are reference to a couple:
Collaborative interactions:
Community + slime mold harvested on Ester Dome

Slime Molds are single cellular organisms that can fuse together to form larger versions of themselves with multiple nuclei and then break apart into single cells again. They can also morph their cellular shape and locomotion method depending on conditions. They don’t have a nervous system but are able to communicate with other cells about a previous experience. In this way, they question our fundamental understanding of cognition and the learning process. What can we, in turn, learn from slime mold information processing, cooperation, adaptability, decision making, and communication and how can we use this information in fields such as medicine and bioengineering?
Influences on human behavior (toxoplasmosis):
Cat + bacteria grown from pet water sample

This sample may or may not contain the single cell parasite Toxoplasmosis gondii, which can be transmitted through animal feces, cats specifically, and has been shown to have subtle effects on human behavior. The CDC estimates that more than 60 million people in the U.S. may be infected with this parasite. I have always had cats so I am likely doomed. Luckily, people with healthy immune systems usually don’t have any symptoms. Much hype and hilarity was made of cats controlling their human’s behavior when this research originally came out.  But what I would like to know is what other microbes out there are influencing our behaviors that we don’t know about yet?

​The idea with this connection is that we are what we eat, including migratory birds, who travel and live in far places in the world. What they eat when they are halfway across the world influences their microbiome, which, in turn, can potentially affect ours when we hunt, pluck, consume them. We can come into contact with microbial communities that are far flung in unexpected ways.

Fungus is an important decomposer in the boreal forests as part of the regenerative cycle. It is also part of the food web itself for animals and humans, providing the same micronutrients that help foster a healthy forest ecosystem.

Go wash your hands often and well. This is a reminder. Seriously, Norovirus and C.difficile, for example, are not removed through using hand sanitizer: http://infectioncontrol.tips/2015/12/08/1210/

I find it fascinating that we share so much with our partners, our spouses, our family members. Our homes are large petri dishes full of microbes that we share with others in our household. And I wonder if it makes us more whole somehow, more complete, more sharing a deeper unseen experience together of being human.

The background image was taken from water samples at Toolik Lake, Alaska and show phytoplankton and zooplankton, including a copepod.  Fish is an important food source for humans but when you look closely at what they are eating, they are just one part of a much larger food web. Investigations on the  ecosystems and influences upon them can help us understand ...
such as changing habitat conditions like temperature and precipitation, the introduction of chemical compound byproducts of industrialization, evolving geographic environments due to regular earth movement.

​Images from this project 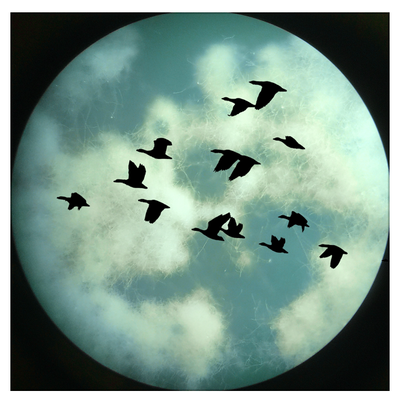 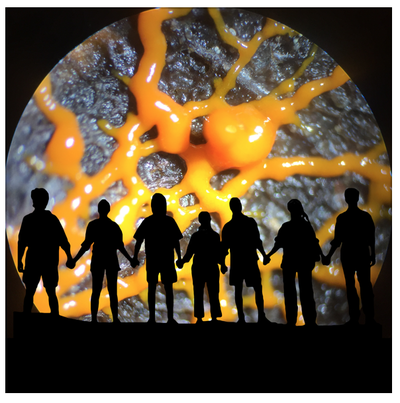 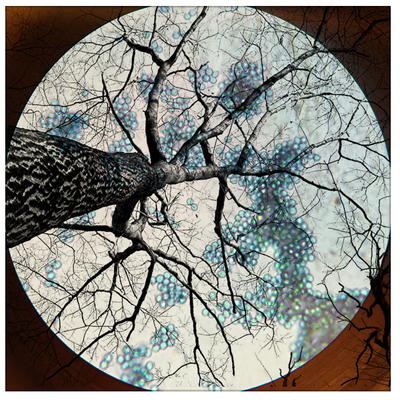 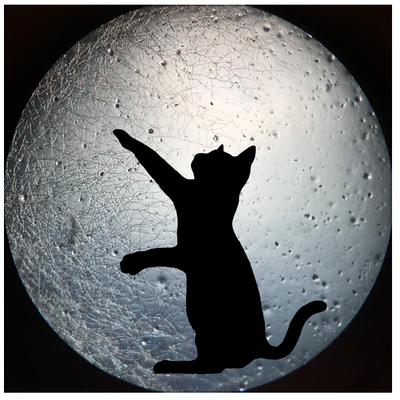 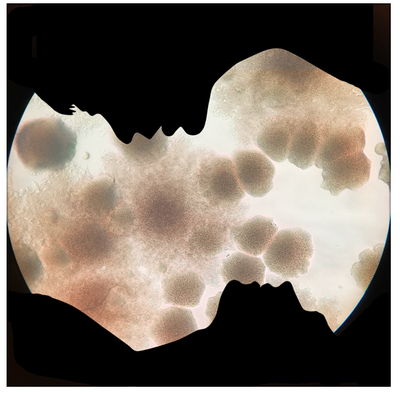 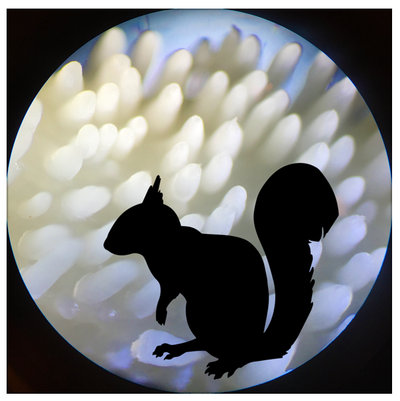 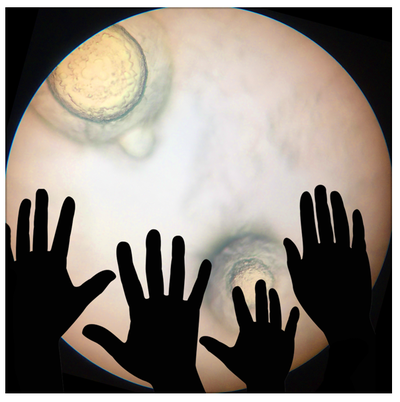 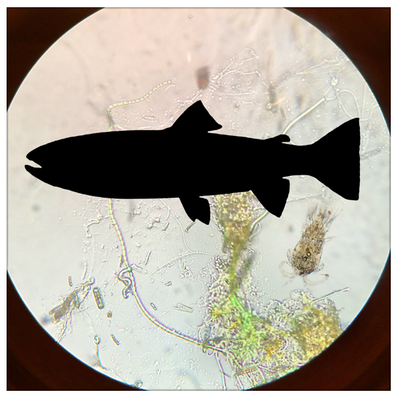 Fungi, although they can be very large in size, are characterized as a microbial organism due to their cellular structure and function.

Fomes fomentarius is known commonly as the tinder polymore, tinder fungus, hoof fungus and tinder conk. It is a common plant parasite that lives on the bark of birch and beech trees throughout the world. It is an important component of the forest ecosystem because when a tree dies, it encourages the production of a white rot, thus initiating the process of decomposition. Traditionally, people have used parts of this fungus for a wide variety of purposes including clothing, as a tobacco substitute, pin cushions, as a drying mechanism for fly fishing, mounting insects, starting fires, and in rituals to clear evil spirits. It has been used medicinally as an anti-inflammatory, diuretic, laxative, calming tonic, to fight tuberculosis, for teeth drying in dentistry, and wound staunching during surgery.  In Chinese medicine, it is used  for the treatment of throat, stomach and uterine cancers. There have been recent studies that show bioactive substances extracted from Fomes fomentarius are successful anti-tumor agents.(4)  There may also be potential for it’s use to enhance circulation, regulate blood sugar and lower blood pressure.

‘Amadou’ is the layer useful for making tinder, and many of the purposes listed above. It is used by modern day woods crafters and was found in a fire starter kit on mummified human remains dating from around 3,300 BC. It is also currently used in Romanian folk art hat and purse making.

Echnomycologist Robert Blanchette (University of Minnesota) was instrumental in my inspiration for this project as was Mako Csaba, a traditional amadou hat maker in Romania.  Thanks also to A Weaver’s Yarn.

Medium: Alaska North Slope crude oil, graphite, oil paint, acrylics, gold leaf
​
Over time, hydrocarbons, such as crude oil, are partially degraded by a number of specific species of bacteria that occur naturally in the environment. This was observed recently in the Deep Water Horizon spill in the Gulf of Mexico where a few ‘nutritionally diverse’ bacteria types increased in population density in the spill area. Studies have shown that the bacteria populations present in warm waters vs cold waters differ in both species, concentration, and behavior due to multiple environmental factors and there are fewer available bacteria populations in the cold water. As Alaska becomes more involved with offshore oil development, of particular interest to both environmentalists and oil companies is the viability of utilizing natural response mechanisms such as oil eating bacteria in addition to chemical dispersants to mitigate spill damage.  While the biodegradation process does actively occur in arctic waters, there are significant additional challenges not present elsewhere, such as extreme cold, winter storm activity, sea ice cover and it’s movement, and very remote locations that add greatly to the complexity of the issue.
​
This work explores biodegradation of Alaska crude oil in the Arctic Ocean by a limited number of bacteria species. Microbiologist Mary Beth Leigh was instrumental in my inspiration for this project as was work by others on the Committee on Responding to Oil Spills in the U.S. Arctic Marine Environment, National Research Council.   Special thanks to British Petroleum. ​ 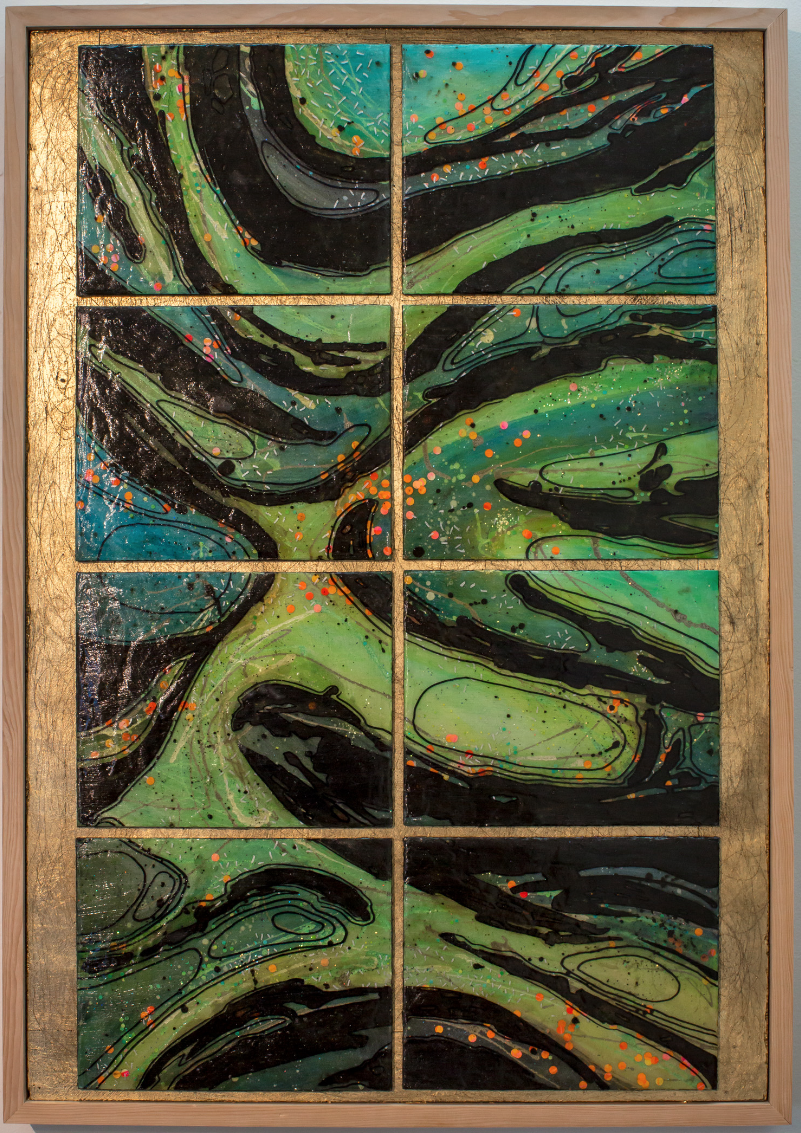